Back to the blog

Starting today I will switch my blogging over to medium. Please follow this link if you wish to follow me   Medium
Posted by Unknown at 5:36 AM No comments:

I had my mentor appointment yesterday and we had to go over my pace. It seems I was taking too long to go through each checkpoint. The delay is of course attributed to the double dip approach I was taking. As mentioned before in my blog I was doing each checkpoint twice. The second time was for review. We decided that I should change that approach. So starting today I started with one time runs.
Its been great to be back to new material quicker. Last week I started tracking my hours with +Toggle International. I didn't get to the 40 hours that I had placed as my goal. I will this week for sure. 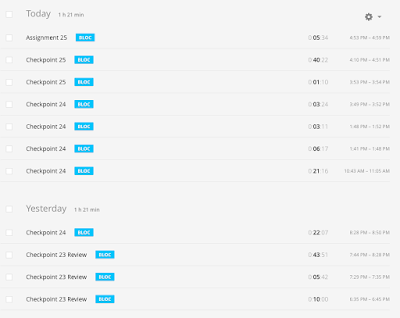 It's been two days since I began working on the rails section of my bloc program. Its been a smooth ride so far. Tomorrow I will be getting to resources and routes, I know this topic is somewhat confusing for me and it will take some time to digest.

A fun thing I learned on rails is the ability to create random data for my tests using an approach made from scratch.

Today I started with the 7 minute workout challenge. Very intense workout. It was expected :p just 7 minutes per day! I will let you know how I'm doing with this challenge. 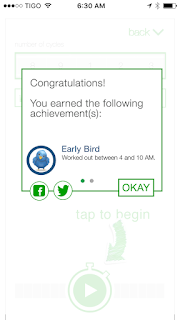 Another challenge I've been working on is the cold shower in the morning every day. Currently on day 15 and it has changed my life! So much more energy!! Basically I jump in the shower and turn it all the way to the cold side. The temperature feels so cold I thought it must have been in the single digits (celsius). I measured the temperature and it actually came to 16.5 Celsius or about 66 Fahrenheit.  Its super tough to stay 5 minutes under the stream, but its a nice scary thing to do every day.

Posted by Unknown at 5:24 PM No comments:

Today I have set my weekly coding goal to 40 hours. That way I will complete the SET in 40 weeks from today. By my birthday next year (3/8/17).  I will be starting my weeks on Sunday for purposes of measurement. To measure my progress I will be using Toggl.

I am beginning to read Learn Ruby The Hard Way, 3rd Edition to get another layer of support to my understanding of ruby. I will work on new material of this book a little each day and review it the next. Exactly what I've been doing for my re-run of bloc's curriculum. This will assure that I learn this material for the long run.

By the way, I forgot to mention in my last post that I read an excellent reference book on Software Engineering Craftsmanship. (Apprenticeship Patterns - O'Reilly Media)

Big shout out to +Brian Douglas who has inspired me to write my own blog.
Posted by Unknown at 6:31 PM No comments:

I couldn't wait until tomorrow to continue my coding story. So here we go again.

The first real app I created was ideapp an initiative to create a new ERP for +ideamos  the company where I currently work for. I built it using the many sources I shared in the first part of this post. The development of the first alpha went from April until December 2015. Although the app is functional and was almost ready for deployment at the moment, the management at the company decided to stick with the current ERP at least for another year.

In terms of the code I wrote for this app, I think the code was not the most efficient, but also not spaghetti code (to the best of my knowledge). I chose ruby on rails to build it (the only language I had learned so far). I did not use any testing frameworks to build it (did not realize how important it is). It was built using a mixture of trial and error, copy-pasting from stack overflow and the courses I had taken over those 8 months. The development was done mainly at night after work and the ocasional 3 am before work attempts. I tried out polyphasic sleep to begin my career change and help with the care of my newly born baby girl (thats why I woke up at 3am to work sometimes). At the end I decided not to continue with polyphasic sleeping because I felt like a zombie during the day.

Fast forward to  January 11th 2016 I submitted my first assignment towards the  Bloc | Software Engineering Track. After my initial exposure to coding I decided I needed to get into full steam learning. Although I had completed a few apps before I started bloc I knew there needed to be the professional edge to my programming education.

I signed up for the 72-week part time program. Which meant I had to put in 25 hours a week to complete the program in time. As I had done in the development of  ideapp I worked on the program at nights after work.

All went great in the first 15 weeks of my training with bloc until I realized I'd gone through the checkpoints too fast. So I decided to return to the beginning of the program and re do every single checkpoint again. Tough call but I think it has made sense. In between that change I also decided to change mentors and chose Phil to accompany me throughout my program. This shift required me to change the pace of my program from the 72-week to the 144-week part-time to be able to catch up.

Fast forward again to today (June 2nd 2016) I feel that I have built the foundation of my learning of ruby way deeper. It has helped me tons to redo all the checkpoints from scratch. I am currently at checkpoint 23 and will continue to blog my progress.

I have decided to set up a Coding Log/Accountability sheet in my google drive to make sure I stick to schedule.

Posted by Unknown at 6:14 PM No comments:

I started trying programming a little more than  2 years ago. Per github my first commit was on may 7th, 2014. About 2 weeks after my wedding and four years after I obtained my Bachelors of Science in Business Administration @ Boston University. Although I went to school for Finance I've always loved anything related to computers. I became interested in programming when I stumbled by this particular youtube video.


After this I knew I had go try it out. Right after I finished watching the video I signed up at code.org and completed the courses available at that time. Awesome way to get people interested in programming.

That's why I signed up @ +Treehouse for their ruby on rails program. Had a great learning experience while there. I even got a tweet like from their founder once.


From those early days I kept trying out ruby and rails while working full time as director of finance in @ +ideamos .

Some of the tutorials/courses I completed after treehouse:

Stay tuned for the continuation of this story.

i.e thanks +CodeNewbie and +Brian Douglas  for getting me motivated to blog about my career change!